How to tell if a regular client is a flight risk

Breaking up can be hard to do, and whether it’s the end of a personal relationship or a professional one – the warning signs are often there sooner than you think. Many a song and sonnet has touched on the pangs of regret a dumped partner had over something they did, or didn’t do, before the situation deteriorated beyond repair.

But professional relationships can be exactly the same in the sense that when a client packs their bags and leaves – metaphorically at least – often we’re able to look back and realise that things probably weren’t looking too good there for a while. The trick is to spot those signs before it’s too late and, presuming they’re a client you want to keep – doing something to address the situation before it’s too late.

So, let’s have a look at some of those warning signs and some of the ways to avoid a client walking away.

1. They’re not getting back to you

Being ignored, blanked, swerved, ghosted, whatever generation you belong to you’ve probably got a different name for it, but whatever you call it, it’s probably the most obvious sign you could be on the endangered species list.

Even if they haven’t cut you off completely (yet), if they’re getting slower or the communications are more laboured, it could be a red flag.

This sign should be treated with some degree of caution because it could just be a case of them being tied up with work or  something in their personal life. Don’t jump to conclusions too soon, but do keep an eye on things.

When it’s going well, the work you’re sending through might only result in one or two requests for changes, or if you’re lucky – none at all. But as things start to deteriorate you might find the requests for changes are getting a bit more full on, complicated and perhaps even inexplicable.

There’s a few possible reasons for this. One is that they’re deliberately trying to make it harder for you to work with them, hoping that you’ll dump them instead and spare them an unpleasant choice. The other, they’re unhappy withyour work and are trying to make themselves clear so they can give reasons to terminate your contract.

Psychologically too, if they’re starting to view you as a bit of a burden they could also feel that they’re doing you a favour by even continuing to hire you.

There’s nothing more likely to sour a professional relationship quickly than when we feel the person with their hand on the purse strings isn’t paying up.

You might find that they have started to take longer to pay you, or that you need to remind them more than you used to. There could be legitimate cash flow reasons for this, especially if you’re sub-contracting for another freelancer. If they haven’t been paid then that might delay you getting your money, but they should at least explain if that’s the case.

Sadly, there’s the chance that they’re doing this for the same reason as above; they see it as an easy way to deliberately sour the milk and cut you loose, or they’re secretly annoyed about having to pay you at all.

Working with a client is usually a collaborative process because they’re not just hiring your skills – they’re hiring your professional experience. That’s why many freelancers love doing what they do – it offers the chance to bring value.

A healthy relationship will see the client willing to let you bring your ideas to the table, and they might actively ask you for more input or to run creative thoughts past you. They don’t have to listen to them, they’re calling the shots after all, but a complete reluctance to accept any of your input when they previously have done could be a sign that their attitude is hardening.

5. They’re on the lookout for team members in your space

If there’s a vacancy out there for the role you’re currently doing, then chances are they’re looking to change things up. It might not be an immediate issue, maybe they want to hire an entry level member of staff and get them trained up, or maybe they’re expanding and need more staff. Context is everything, but by and large – the fact that they’re recruiting in-house probably isn’t a good thing for a freelancer.

So, what can you do about it?

Just because the warning signs are there doesn’t mean it’s a foregone conclusion, after all, if they were past the point of no return, they wouldn’t still be hiring you at all.

When relationships hit the rocks it’s good to remember why it worked well in the first place. Make time for a proper catchup. If you only usually communicate via email, ask them if they’ve got time for a phone call or (the dreaded) Zoom interaction.

Use this time to try and gauge what their needs are and whether their requirements have changed. This is your chance to be attentive, show you’re interested and that at the end of the day you’re there to help. Think about them like a new client you’re trying to woo. Also, reconnecting is a reminder that you’re a real person on the end of that email address.

Think how you can add value

It’s not likely that a client will ditch you over prices alone, unless their finances have hit serious problems, but if money is a factor maybe see if there’s a way you can offer a discount for additional services? Be careful here though, a client who’s not profitable isn’t worth keeping anyway.

Know when to let them go

Which brings us to an important point. If you think they’re about to leave, maybe ask yourself if it’s for the best. They could be bringing negative attitudes to your dealings which will impact how you feel about the job you love. If they want to go, maybe it’s time to let them and find someone that loves you – professionally at least – for who you are. You’ll find someone else. 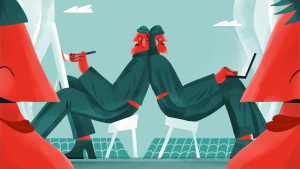 How to Switch Off

When you’re a freelancer, that means you can literally aspend all of your time working. How do you avoid that? 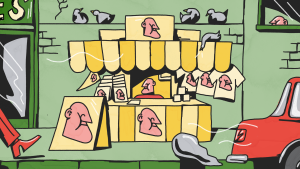 How should journalists build their social media brand?

For better or worse, I

Writing on writing; how to pen your novel while you freelance

Looking to write the next great best seller while getting bylines? Author Holly Williams walks through how to do it 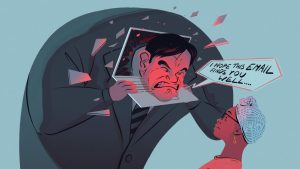 We all have that annoying client that we’re unsure how to work with. So here’s a step by step guide to handling difficult freelance clients.