Kill The Boss In Your Head: Freelancing and Creativity

Often, when I have a deadline looming so large it seems to blot out the sun, my brain lurches back a couple of decades to a Calvin and Hobbes cartoon I loved as a teenager. Calvin, happily playing in the sandpit, is explaining that he is in no hurry to start the story he needs to write as homework, but instead is simply waiting for inspiration to strike. “You can’t just turn on creativity like a faucet,” he protests, “you have to be in the right mood.” What mood is that, asks Hobbes? “Last-minute panic.”

It’s a neat summation of the tension and anxiety at the heart of all paid freelance work – what are the conditions that best support the free-flowing of creativity? What helps you produce your best work? Intense, short-notice deadlines? Endless, unpressured free time to think? Rigid self-organisation, routines and planning? Mescaline for breakfast? Frantic exercise? Cold showers? Ten cups of coffee? Lying in a field gazing at the clouds like some kind of goddamn hippy?

People have different answers to this question, and many freelancers will have different answers from one week to the next. A hell of a lot of time is devoted to exploring the functioning of creativity on a personal, individual or psychological level – how often have you heard some variation of ‘I simply have to be wearing blue socks/hungover/facing south in order to write/draw/cook’? – and perhaps too little to the way the nature of modern work itself, and the economic system around it, shapes us and shapes the work we produce.

The last few years have seen a series of strikes by workers in what has become known as the ‘gig economy’. Drivers at Deliveroo, Addison Lee and UberEats, as well as other couriers, foster carers, McDonalds workers, plumbers and outsourced workers of various kinds – notably and cleaners, security, catering staff and porters working at London’s universities, and various government ministries – have been fighting for a living wage, sick pay and pensions. Supporting them in many cases are the IWGB, UVW or IWW, three small, distinctive trade unions, devoted to countering the very 21st century exploitation, low pay and insecurity that goes hand-in-hand with what employers call ‘flexibility’ and employees know as precarity. The story of Addison Lee driver Imran Iqbal, told here – struggling to support his family, working 10 hours a day, 7 days a week, earning less today than he did in 1995 when he worked in a now-closed factory – is an instructive one, for understanding the changing nature of our economy.

Creative freelancing may seem like a different world, in some respects. But the same economic forces shape this kind of work. And similarly, as, in my case, a freelance journalist, pay rates of 30p a word, common in the 1990s, long before I’d even started a 15-year career in the industry, are dismissed as unrealistic in 2019. “I fear the NUJ are living in 1999 recommending a fee like [30p a word],” a senior editor at one of Britain’s most famous publishing houses wrote to me a few years ago, explaining why the rate for a journal they were publishing was only a third of the union’s recommended minimum. He continued: “We are now, as you know, living in a world where nobody gets paid for anything.”

Wage stagnation, overwork and insecurity are plagues on all our houses. The journey from ‘Fordist’ capitalism of the post-war era – the assembly line and the trade union, the job for life and the factory floor; named after Henry Ford and the Ford Motor Company – to the ‘Post-Fordism’ that has taken hold since the 1980s, with its precarity of various kinds, is important to understand. One of its main hallmarks was that in losing so much job security, workers got some of the freedom and flexibility that they always wanted: in pointing out what we have all lost since the Thatcher and Reagan revolutions (job security, pay rises, stronger rights and collective bargaining), we shouldn’t gloss over the boredom and monotony of the work most of our ancestors were doing. But ‘flexibility’ and ‘freedom’ in 2019 are so often red flags for precarity and casualisation – which of course affect people in day-jobs, too.

Fundamentally, freelance creative work is scrappy, precarious gig economy work like any other. Yet the tendency to romanticise the squalor of the starving artist has hung in the air for centuries. The mythos of the hack writers, desperate poets and bohemian literary drudges of ‘Grub Street’, once a real street in the City of London, goes back the best part of 400 years, to the art and literature of the time – see Hogarth’s Distressed Poet, working in his poky, untidy garret, failing to provide for his family, writing a poem entitled ‘Poverty’. Then there is the euphemistic trope of the ‘resting actor’, who fails to find paid work in Hollywood, and so works in the service industry to pay the bills. It brings to mind aspiring writer Daisy’s epiphany in the sitcom Spaced, working in a dreadful, low-paid kitchen job and all her colleagues are out-of-work creatives too.

It is worth thinking about the relationship between creativity and total freedom: from my own experience, as a freelance journalist for 13 years, being asked to write things I wouldn’t ever have pitched myself has often led to unexpected breakthroughs, enjoyable pieces of research, and new directions. Not to mention, some of the work you’re asked to do in ostensibly ‘less free’ staff roles can itself be edifying and stimulate fresh ideas. It certainly helped me to be a better journalist in the long run, training on staff at the South London Press and having to report on local theatre productions, interview a Slade tribute band, and other such glamorous tasks. I learned things that helped spur my creativity as a freelancer – and, I think, did one of the first ever interviews with the famous Punchdrunk Theatre Company, when they themselves were young hopefuls, fresh out of university.

The often-unspoken factor here is privilege – in how it gives so many people the safety net to withstand the insecurity of creative freelancing and helps get them started in the first place. That Trainee Arts Journalist position I got at the SLP has long since been abolished, as more and more cutbacks were implemented; but even at that point, in the early 2000s, when London was much less expensive, the pay for my entry-level graduate job in journalism was so terrible that I could only afford to take it by continuing to live at home with my parents, rent-free (one train stop away from the SLP office, fortunately). Under our current economic system, the opportunities are so few and far between, and the odds are so stacked against poorer people, those growing up outside London, people of colour or those without connections, that there is no such thing as protected freedom to work creatively.

There is another fundamental problem here, and it can be summed up by thinking deeper about the phrase “be your own boss”. In this scenario, you are the boss! What better way of ensuring your freedom, than being at the top of the tree?

Well, hang on. If you have internalised capitalism’s productivity-drive and management hierarchy in your own head, you’ve also become the victim of your own round-the-clock, bullying micro-manager. To make matters worse, the bleeding of work outside of normal working hours – checking emails, messages and social media messages all the time, responding to clients the moment they call – precludes the opportunity for restorative thinking, breathing space, and time to let new creative ideas bloom.

In his landmark essay, The Privatisation of Stress, and in this related 2013 panel discussion on work and mental health, the writer Mark Fisher discussed two brilliantly incisive phrases: both of which amount to structures of feeling unique to modern working life, and its precarity.

The first, “magical voluntarism”, perpetuated via TV programmes like The Fairy Jobmother, and endless, self-helpy injunctions, maxims and stratagems to maximise our own productivity, and potential. It is a mindset in which we are taught that “if we don’t succeed, it is simply because we have not put the work in to reconstruct ourselves.” It’s the kind of thing you see written on image macros of pictures of sunsets, and it’s every bit as pernicious as it is cheesy.

The second concept, Fisher described in the panel discussion as “mandatory entrepreneurialism, in which we are all required to sell ourselves… we ruthlessly exploit ourselves much more than any actual boss would legally be able to get away with.”

Both of these ideas are about shifting the responsibility for survival ever more onto the shoulders of the individual worker, further isolating them from their peers, and heightening guilt, stress, and the need for 24/7 salesmanship. Neither of them are conducive to the free-flowing of creative thought.

This all sounds pretty grim, I know – so what’s the solution? Firstly, recognising we are workers, like any other kind – not floaty free spirits, who can be paid in exposure, or underpaid because our job title might have ‘creative’ in it, and a client thinks you might occasionally enjoy yourself. Secondly, contesting the competitive isolation and silo-like individualism of freelance work by talking to friends and peers – about your own ideas, about collaborations, but about pay rates and employers’ behaviour, too. And finally, by trying to liberate your own brain from the yoke of internalised managerialism and magical voluntarism. The battle with productivity guilt is a battle I have with myself literally daily, but there is no choice but to fight it.

Freelancers: kill the boss in your head, and start a workers’ co-operative instead.

The Rise of NFTs and ‘Crypto-art’

Want to learn what all the fuss is about? NFTs have been around for awhile, but how can freelancers use them in their business? Well, there’s a couple of ways.

You may have gone into freelancing to avoid ever having to do interviews. Well, sadly, in same cases you may have to. So here’s a guide to interviewing as a freelancer.

This second instalment of the 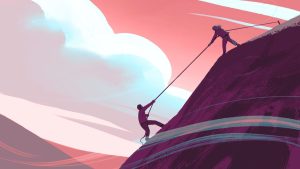 The value of mentorship for freelancers

What is the value of mentorship for freelancers? It can be a way of moving ahead in your career, or it can get you the links you need in your industry.