Like many other freelance writers, I stumbled into the industry somewhat by accident. Before COVID-19, I had been living a cushy life abroad, basking in the satisfaction of not having to update my LinkedIn. But with the start of the pandemic, I fled back home and found myself confronted with the reality of needing to find a job.

I spent the first half of 2020 searching, applying to everything from marketing positions to openings at local coffee shops and book stores. Whether because of the pandemic, a lack of tangible experience, or the general state of the U.S. job market, I struggled to land anything concrete.

But on a random spring day, a chance conversation with a friend led me to apply for a job I’d never before considered—a freelance content writing position. My friend who worked there explained that the company always had a lot of work to offer and that as long as you hustled, you could make some decent money.

I applied, got accepted, and began supporting myself like half of all Americans do—by freelancing. Over time, my new writing job became my sole source of income, my mental health started to stagger, and I found myself in the grips of a trap shared by many. I was working for an exploitative content mill.

To new writers or anyone outside the industry, a content mill is a company that employs scores of freelance workers to add SEO, or search engine optimization, value to a website.

While it may sound harmless, SEO is often the bane of internet users as it creates redundant and unnecessarily lengthy content. If you’ve ever read a guide or listicle that you feel like you’ve seen ten times before, it’s because you probably have.

In terms of profit margins and business strategy, however, content mills are genius. They’re able to satisfy clients while outsourcing their work and keeping overhead costs low. Unfortunately, the hoards of freelancers they employ often see very little of the company’s success.

Alyssa Cokinis, a freelance writer and theater artist, has a story that mirrors mine. Due to COVID-19, she found herself looking for a job and wound up working for a content mill.

“When I first discovered the content mill I worked at, I appreciated the diversity of topics and the general flexibility,” Alyssa says. “I could work whenever and wherever I wanted. It was a great way to supplement my income, as I was working another freelance gig and had been laid off from my more permanent position due to COVID-19.”

After a time, however, the magic began to wear off. Alyssa, like most freelance workers, realized that she was working for peanuts. With that realization, the veneer of excitement and opportunity started to crack.

“My feelings towards the content mill changed quicker than I anticipated. A freelance writer friend of mine who regularly pitches and writes for publications expressed concern at how low the rates were. That was red flag number one. Then, my mental health and concentration began to wane with each article I wrote because I would only get around $30/1000 words.”

Before she could fully understand what was happening, Alyssa found herself needing an escape. “When you’re churning out content and you have to survive in this world, 3 cents/word is not sustainable, nor is working without any benefits,” she says. “Eventually, I had to get out and look for an hourly job just to get a regular income and not destroy my love of writing.”
While different experts offer different advice, a general freelancing rule is to avoid taking work that pays less than 20 cents/word. Alyssa’s content mill offered 3 cents/word, and while that’s undoubtedly low, it’s still far from the bottom of the barrel. On ProBlogger and other freelance job boards, it’s not uncommon to find content mills offering writers a set rate of $10/article, no matter the length. What’s most disheartening is that people take those jobs out of desperation, allowing those companies to continue their exploitative practices.

Making lemons out of lemonade  ‍

While content mills might try their best to take advantage of hungry freelancers, some manage to make the most of them—at least for a time. Kiki Dy is one such writer. Although she has bylines in Fodors, Psychedelic Spotlight, the Pheonix, and other publications, she continued to work for her old content mill until recently.
“I used to begin my workdays by warming up with an hour of QC work for my old content mill,” Kiki tells me. “It was mindless, straightforward, and even a bit relaxing—until they did the classic content mill maneuver and became even more of micromanaging jerks.”

Kiki had the strength to withstand and even make the most of an exploitative work relationship. But after a while, the company culture coupled with unreasonable demands became too much.

“Between their infantile emoji use and corny mantras like ‘we’re a family,’ my content mill was run by a bunch of passive-aggressive people who really didn’t know anything about the craft of web copy and certainly didn’t know how much to pay us. They spoke to us like babies, would make suggestions that made the content worse, and, once they installed software that let them know how much time each writer was spending on each assignment, I decided it was no longer worth it, even for the mindless money.”

While she managed to turn a toxic work environment into a positive one for a while, Kiki eventually decided that it was time to leave that part of her career behind. After all, “mindless money” isn’t hard to make, and it should never come from a source that adds unnecessary stress to your life.

Working for a content mill can be a solid way to make money in the short term, especially if other job opportunities are few and far between. That said, relying on them for too long can put you on a fast track to a mental health crisis.

Content mills rob you of your ability to pursue other writing opportunities and force you to prioritize quantity over quality. They advertise themselves as career stepping stones, but most writers who work for them end up feeling stuck. My advice? Avoid them altogether and instead, use resources like Write Jobs Plus+ and UnderPinned.

Times will be tough—especially if you don’t have another source of income and you’re trying to launch your career. But once you finally make it over the initial hump and find a client that meets your standards, you’ll thank yourself for not settling for less than you’re worth.

A guide to planning for unsteady pay

Freelancing can mean waiting a while for a paid invoice, as we all know. So how do you deal with consistentinconsistency?

The W-8BEN form for freelancers: how to avoid tax when earning money from the US

You don’t want to get

“You should never be bored because there is always something to learn.” Jen Ruiz takes her love of blogging full time

If you are thinking about quitting your 9-5 and finding success as a writer, Jen Ruiz has done just that and done it in style. Hear from her about taking her life as a lawyer and turning it upside down.

Here’s how to be clear with clients about what you need from their brief, and what they should expect from you too in the beginnings of the conversation 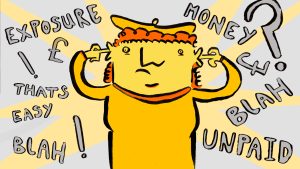 Ten things you should never say to a freelancer

Vent your client frustrations through us! A must read for anyone that hires/knows/ever talks to a freelancer, here’s ten things never to say to a freelancer

Freelancers, this is how to take control of your money

The 30% rule is going to make your life a lot easier. Make sure you follow it if you’re a freelancer looking to manage their money more consistenly