Journalist and writer Tim Atkinson, a graduate of the Ultimate Guide to Freelancing, writes on his experience of the course and how it helped him gain the confidence he needed to get moving.

The Ultimate Guide to Freelancing, a five week course promising to “give you all the information you need to get ahead” began in February 2021. As the name suggests, it didn’t undersell itself. Making bold claims like that can sometimes set you up to fail, but not if you really do know what you’re talking about, you really are passionate about what you do and you can show it, even at six p.m. on a Thursday evening in the weekly Zoom Q&A.

I’d heard of UnderPinned before; I’d dabbled a bit with some of their online resources, mocking up a profile and generally nosying around the website. Then I came across the webinar their founder and course leader Albert Azis-Clauson was running on freelancing. I was free, it was free, and so I joined. An hour later and my keyboard (I’d been trying to take notes) was almost smoking and my fingers hurt. But my head? My head was so full of new ideas, or ways to utilise old ideas, of new perspectives, of endless possibilities, that it was almost inevitable I’d sign on the dotted line and join the course.

My only reservation was the broad nature of freelancing, and the need to cover so many bases. There were PR’s, illustrators, graphic designers, copywriters, editors, even yoga teachers among my fellow students. And then there’s me, hack writer with a modest back catalogue on the look out for a book deal. But that night, before the course had even started, I re-wrote my pitch. Because the principle that underpins (yes, pun intended) UnderPinned is “perfect the pitch”. And the foundation for that is simple: what problem do you solve?

I’d never really thought of it that way before. If anything, I’d thought I had the problem and they (agents, editors, publishers) had the solution. Hence the typically grovelling, self-effacing cover letter that seems expected in my industry. That was the first thing to go. My approaches aren’t “please would you consider” any longer. Now they’re a succinct summary of what I can do for them and why they should hire me.

The other “bang bang” (Albert’s catchphrase) notion is using contacts. It’s a no-brainer I know, but being English and modest I’d always shied away from it. I did once crowdfund a book with Unbound. But that was so hard I swore I’d never do anything like it again. I’m not a natural when it comes to asking someone for something.

Luckily, the first person I asked for something as a result of the Ultimate Guide’s inspiration was used both to asking, and to being asked. He’s Australian, if that makes a difference. And he’s probably the world’s leading pain scientist. I’ve been doing a lot of work on pain just lately. Partly because I suffer from it, chronically. But mainly because I’ve written a book about it. A book, furthermore, that the Aussie pain guy says is “A book written by an expert, because when it comes to pain, those who suffer are the experts.” Beat that for a cover quote. Bang! Bang!

Feel the buzz… and pay the bills

But what about my fellow students? I was keen to see whether my positive experience of the course has been shared by others. Nikki is a London-based copywriter who has been freelancing for six months. Like me she attended the online ‘taster’ with Albert. “I came out of that webinar pumped,” she says, “and with more value than about five webinars I’d previously attended combined. I figured if I got all that out of a 1-hour session then it would be worth signing up.” And was it worth it? “YES,” she says, in capital letters! “It’s been amazing on so many levels, as well as  bagging a couple of new clients which is obviously fantastic!”

That’s good to hear because while it’s fine to feel the buzz, at the end of the day we need to pay the bills. It’s a bottom-line not lost on Albert, who insists early on that freelancers need to decide what their financial requirements are and build from there.

Abigail, a freelance writer living in York, had been aware of UP for a while. “I actually knew about them through my Goldsmiths University network, and I (correctly) assumed the course would help with finding confidence in my career, and learning the ins-and-outs of working as a freelancer.” And has it? “The way I speak about my business to people has changed, and I’ve gained some confidence. I actually had a phone call with a potential client last week, and found myself not as nervous while talking about what I can do, and being more able to ‘sell’ myself and my services.”

It’s precisely that clarity and confidence which has helped Francesca, an independent Book Designer and typesetter, most. “I am changing my approach radically,” she tells me. “Firstly, I’m starting to think of my skills as an asset. I’ve approached people within my targeted industry and talked to them. Slowly, I am building my network now, and I am getting to know how the industry works.”

But the biggest change the course has made seems to be how we all think about ourselves and our freelance careers. “It’s given my business more direction,” Nikki says. Francesca agrees: “I see a huge difference in the way I am approaching the whole process. I am thinking of myself as a business now.” And Abigail adds “thinking about actually ‘leading a business’ not just ‘being a freelancer’, has made me get more serious and structured about how I work.”

After five weeks of Albert’s evangelical zeal it seems we’re all not only clearer about what we’re doing, but we’re buzzing! And that’s a ‘badass’ benefit… as the man himself would probably say!

If you’re interested in taking part in the course, you can find out more here. If you’re unsure about whether it’s for you, you can sign up and take part in one of our free webinars here.

How to go freelance straight after uni

How do you go freelance straight after uni? You honestly ask yourself if you’re ready, and then you just lean into it 100%. And you read this article to find out more.

The key to breaking the cycle of counterproductivity

The hardest tasks are always the easiest ones to avoid. What can you do to face those tasks straight on? 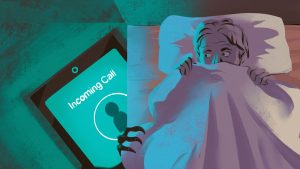 Do you dread the phone call with new clients? Here’s how to stay calm and confident on phone calls that seem to only to exist to stress you out

Red flags to consider before signing a contract

You should always have a contract. But it is a weapon that can be used against you. Here are some common red flags clients may sneak into your contract.

Freelancing with a niche is often encouraged. But Ellen Juliette argues that you don’t always need a specific interest to get started.

How to tackle portfolio procrastination

Making good portfolios is crucial for your freelance business, but it can be tempting to procrastinate. Check out UnderPinned’s Virtual Office for portfolio templates to fill and send to clients!